Many beginner Spark programmers encounter a “Task not serializable” exception when they try to break their Spark applications into Java classes. There are a number of posts to instruct developers on how to solve this problem. Also, there are excellent overviews of Spark. Nonetheless, I think it is worthwhile to look at the Spark source code to see where and how tasks get serialized and such exceptions are thrown to better understand those instructions.

Apache Spark is a unified computing engine and a set of libraries for parallel data processing on computer clusters (for detailed exposition, consider “Spark in Action” by J-G Perrin and “Spark: The Definitive Guide” by D. Chambers and M. Zaharia). Algorithmically, parallel computations are done in jobs. A job consists of stages, and a stage consists of tasks. A task is an abstraction of the smallest individual unit of execution (more on these later).

In terms of software architecture, every Spark application consists of a Driver and a set of distributed worker processes (Executors) (see Fig 1). The Driver runs the main() method of our application and it is where a Spark Context (sc for brevity) is created. The Driver runs on a node in our cluster, or on our client, and schedules how jobs are executed with a Cluster Manager. Also, the Driver analyzes, schedules, and distributes work across the Executors.

A Spark application can run in 3 modes: Local, Client, and Cluster. In Local mode, all Spark components run on a single machine. The mode achieves parallelism via threads on that single machine. In Client mode, the client machine maintains the Driver, and the cluster maintains the Executors. In Cluster mode, a user submits a jar file to a Cluster Manager. The manager then launches the Driver on a worker node, in addition to the Executor process.

According to the Spark source code docs, an RDD represents an immutable partitioned collection of elements that can be operated in parallel. The elements (or records) are just Java or Scala objects of the programmer’s choosing. Datasets and DataFrames wrap RDDs. In contrast to RDDs, Datasets and DataFrames contain records, where each record is a structured row with a known schema.

Each RDD contains the following:

An RDD can do transformations and actions (Fig 2). A transformation accepts an RDD and returns another RDD. An action accepts an RDD and does not return an RDD. An action may, for example, save an RDD to a disk, or return the number of rows in an RDD. For example, the RDD.count() action returns the number of elements in an RDD. Internally the action calls the Spark context to initialize a new job:

Here, the first argument is the current RDD, and the second is a function to process partitions. We discuss this in detail in later sections. Let’s go back to transformations. 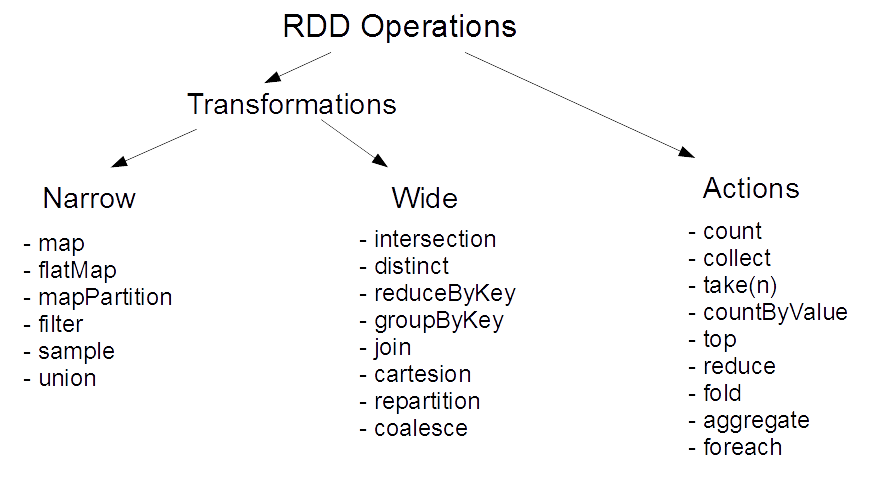 All RDDs extend an abstract class RDD. This class contains the basic operations available to all RDDs. Let’s see, for example, how the RDD.map(...) method works (Fig 3). Let our rddIn be a collection of strings (each composed of words with a ” ” delimeter). We want to map this collection to a collection rddOut = rddIn.map(x->x.split(" ").length). 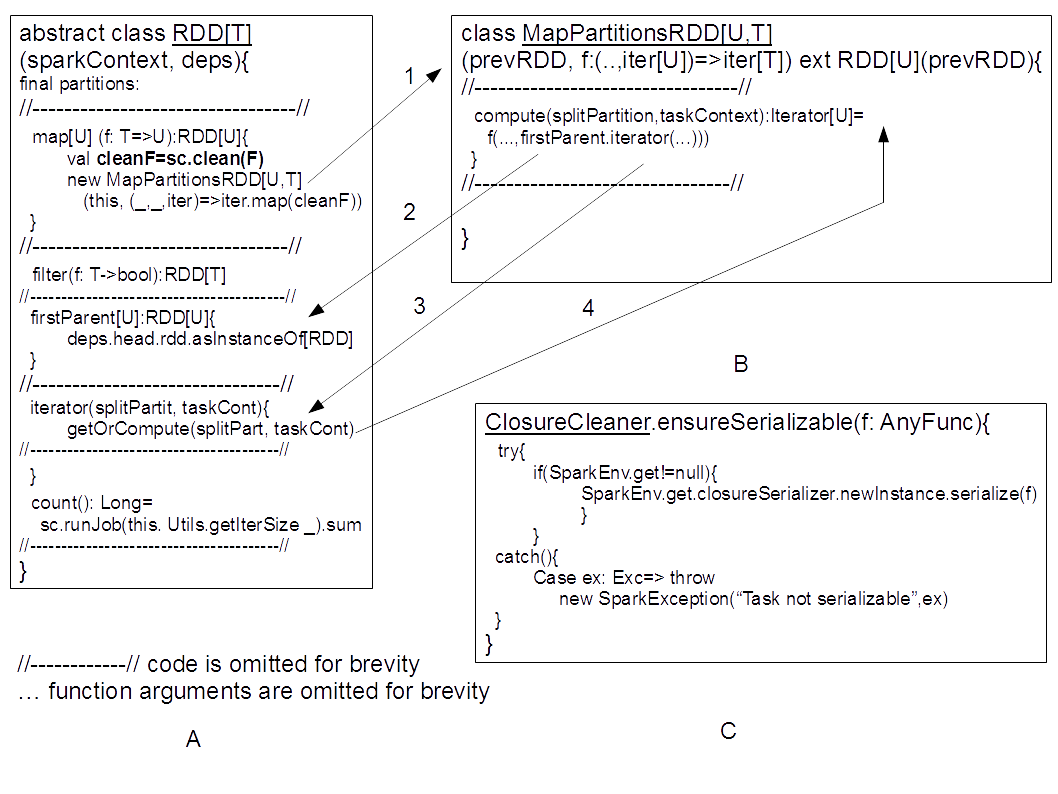 When an RDD.map(f) where f=x->x.split(" ").length is called, the Spark Context cleans the callback f (Fig 3A).  According to SparkContext.scala docs, sc.clean(f) cleans the callback’s closure and makes the callback ready to be serialized and sent to tasks. The cleaner removes unused variables from the callback’s outer scope and updates REPL variables (command-line variables; not our concern in this post). sc.clean(f)  calls ClosureCleaner.ensureSerializable(f). It is there where a dreaded “Task not serializable” exception may be thrown (Fig 3C).

It is easy to see how multiple transformations form up into a Direct Acyclic Graph. Every transformation creates a new RDD, where the parent RDD is the one being transformed. Actions that produce no RDD are leaves of the DAG. Such a DAG of RDDs is called a Logical Execution Plan (see “RDD Lineage — Logical Execution Plan” by Jacek Laskowski for details and more examples). Let’s proceed down the road to see how a physical execution plan gets created from a logical plan to check if the formulated serialization rule holds.

The actual job class is called ActiveJob (Fig 4). The class has a jobId: Int, a finalStage: Stage, a listener: JobListener, and some other fields.  Jobs are only tracked for “leaf” (or final) stages (and no RDDs) of the computational process (more on this later).  There are two kinds of stages.

Fig 4: ActiveJob class (other fields and methods are omitted for brevity)

The first kind of Stage is called ShuffleMapStageand the second one is ResultStage. The difference between the two stages is illustrated in Fig 5 (see “What is Spark’s Shuffle” for details). Here, the system uploads data from Database 1 into 3 partitions. Then the data undergoes a narrow transform (map), then a wide transform (reduceByKey). Finally, the transformed data is saved to another Database 2. So, the transformations are included in the ShuffleMapStage, where the stage ends on the wide (or shuffle) transformation. On the other hand, the ResultStage is composed of a single action: save.

Let’s take a look at a ShuffleMapStage (Fig 6).  According to the source code docs:

“ShuffleMapStages are intermediate stages in the execution DAG that produce data for a shuffle. They occur right before each shuffle operation, and might contain multiple pipelined operations before that (e.g. map and filter). When executed, they save map output files that can later be fetched by reduce tasks. The ‘shuffleDep’ field describes the shuffle each stage is part of.”

The dependency contains a parent RDD, a serializer, an aggregator, a writeProcessor, etc. (the methods needed to complete the stage). Also, the stage contains id:Int, rdd: RDD, and parent stages parents: List[Stage] , mapStageJobs: Seq[ActiveJob]. This stage can be called by multiple jobs.

Fig 6: Spark Stages (other fields, methods, and the Stage constructor arguments are omitted for brevity)

“ResultStages apply a function on some partitions of an RDD to compute the result of an action. The ResultStage object captures the function to execute, ‘func,’ which will be applied to each partition, and the set of partition IDs, ‘partitions.’ Some stages may not run on all partitions of the RDD, for actions like first() and lookup().”

Also, the stage contains id:Int, partitions: Array[Int] (these are partition indexes) , rdd: RDD, and parent stages parents: List[Stage] , activeJob: ActiveJob (the active job for this result stage). Finally, there is the mentioned func: (TaskContext, Iterator[_]) => _ to apply on each partition. Notice that neither stages nor jobs directly refer to any tasks.

“A ShuffleMapTask divides the elements of an RDD into multiple buckets (based on a partitioner specified in the ShuffleDependency).”

A ResultTask sends back the task output to the driver application. Both tasks have a stageId: Int, taskBinary: Broadcast[Array[Byte]], a binary to execute, and partition: Partition, the partition the task is associated with. A ResultTask also has an outputId: Int field, the index of the task in its job. See “The Internals of Apache Spark 3.3.0” for more details of these elements.

To answer our serialization question, we need to investigate how this taskBinary is produced by the Driver, as the Driver creates tasks out of a logical plan.

In Section 2, we saw a simple example of how RDD.count() action calls the spark context (SC) to initiate a new job. Let’s see what happens next in a general case (Fig 8). 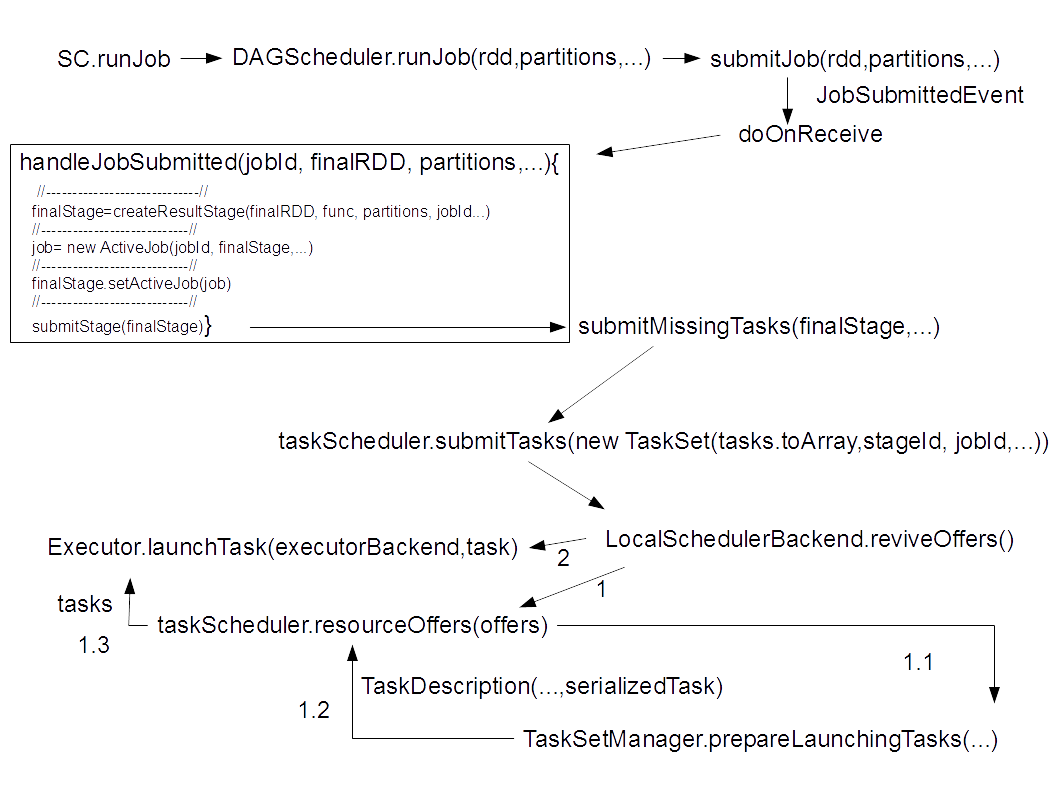 So, the SC calls DAGScheduler.runJob(rdd, func, partitions: Seq[Int],...), where the func processes the partitions. Then the DAGScheduler calls submitJob with the same rdd, func, and partitions. Next, the submitJob method issues a JobSubmittedEvent: the event gets caught in doOnReceive listener. The listener calls handleJobSubmitted method with the same rdd, func, and partitions. It is in this method that a final stage is created, and a new ActiveJob is created from this stage. Next, the final stage is submitted to the submitStage method. This method, in turn, recursively calls the submitMissingTasks(finalStage,..)method on all the parent stages up the logical plan. It is here, where the tasks are created. 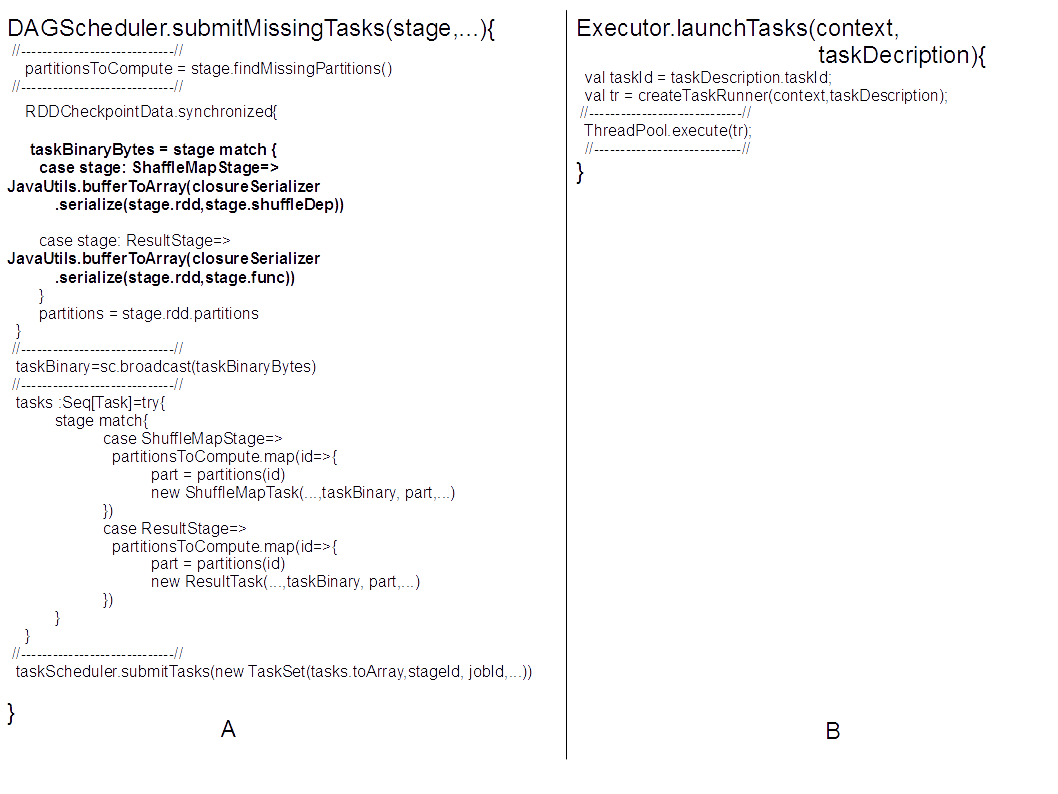 Fig 9: submitMissedTasks and launchTasks methods (omitted method arguments are (…) and omitted pieces of code are //–//)

As we already saw, the serializer doesn’t throw a “task not serialized exception” if the operation callback and its closure are serializable. After the task is serialized, the submitMissingTasks method creates a TaskSet out of these taskBinary, and submits the set to a taskScheduler (Fig 8).

Next, I describe what happens in the local mode. The taskScheduler.submitTasks calls localSchedulerBackend.reviveOffers() to call TaskSetManager.prepareLaunchingTasks(...) to create a TaskDescription. The description contains serializedTask: ByteBuffer and data to run the task. Finally, these taskDescriptions are submitted to Executor.launchTask(executorBackend.task).

On the Executor side (Fig 9B), the Executor creates an instance of TaskRunner with the submitted taskDescription. The task runner is executed in the Spark thread pool. This is it! Let’s summarize what we learned about Spark serialization.

So, we see that to do computations on RDDs, Spark Driver serializes two things: the RDD data and the RDD operation (transformation or action) callback (and the callback’s closure). You may wish to refer again to this article’s first linked post by Michael Knopf about how JVM treats closures and serializes objects.  Obviously, the data should be serializable. As for the callback (and its closure), we may need Spark tools to do CRUD operations on the data. The tools include: SparkSession, SparkContext, HadoopConfiguration, HiveContext, etc. Of these objects, only SparkSession is serializable and can be set as a class field in custom POJOs. How do we use the other tools practically, then?

One way is to use them as local variables inside class methods. For example:

Yes, the variables are created every time the method is called, but this way we get rid of a “task not serializable” exception. Also, some of the configurations may be serializable via SerializableConfiguration utility.

Notice, that sometimes you may have a POJO with non-serializable fields, like SparkContext, and the application still runs. For example, data is simply uploaded from one database and saved into another without any transformation.  The application runs fine because there are no transformation or action callbacks to serialize!

So, the serialization rules are:

In this post, I demonstrated how Spark serializes tasks to execute them. I listed simple rules to avoid a “task not serializable” exception. Also, I presented a situation where a Spark application may work even with non-serializable POJO fields. Hope to see you in Part 2, where I present design patterns to construct Spark applications in a flexible and maintainable way.

Build Tier 1 Service that Is Resilient to Outages - DZone Performance 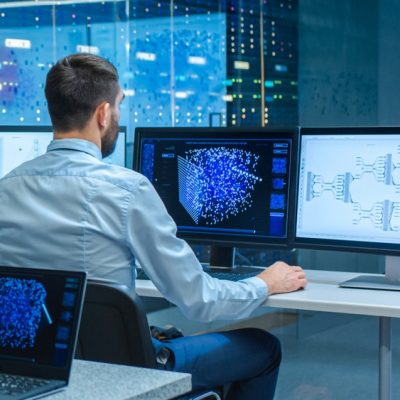 How Big Data Is Shaping the Future of HR Analytics… 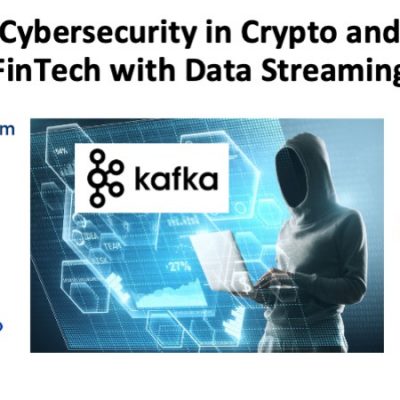 Apache Kafka in Crypto and Finserv for Cybersecurity and Fraud… 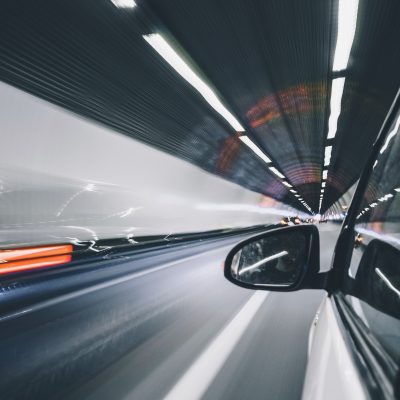 Delivering the Future of Uber-Like Apps With AI an –…